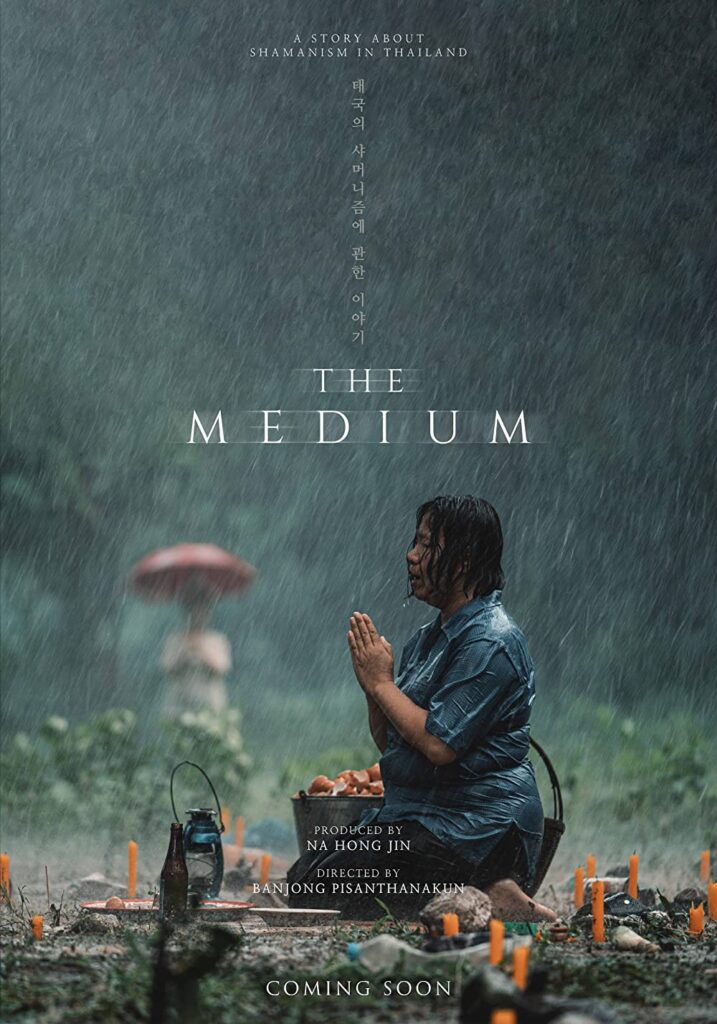 It has been a while since I have watched and reviewed a horror film. Just for the records, I am almost immune to any kind of horror and so the films don’t really affect me in any way even while watching them at night. The last horror film that I can remember which had remotely affected me was the British film The Host which I believe is one of the best films in the genre. So while going through my watchlist, I came across this Thai film The Medium which promised to be a screamfest. On reading about it further, I got to know that this was the official entry of Thailand to the 94th Academy Awards in the foreign film category, which honestly is huge for a horror film. Secondly, the project was helmed by the director of Alone and Shutter and by then I was really excited to watch this film. With that I finished watching The Medium on Amazon Prime last night. Is it worth your time, stay tuned.

Set in Thailand, The Medium follows the story of a shaman who suspects her nephew to be possessed by a goddess which the town does worship. But nothing is what it seems. The story is shot in documentary style but because the tale is fictional(thankfully), we can call this a mockumentary. It was just last week that I had watched the brilliant Malayalam mockumentary Aavasavyuham and slowly but surely I am warming up to this genre. My mindset regarding a mockumentary is changing and as they say you learn something new everytime from films and shows. I thought that mockumentaries are general a spoof of documentary. But after watching The Medium, my definition has changed. Mockumentaries can be of any genre where the film is shot in a fictional documentary style.

And here, the story is a slow burn and particularly this format of storytelling does give you a good amount of chills. The screenplay standing at 130 minutes may seem a little long for a horror film but once you start watching it, you won’t feel its length to be much.

The drama focuses on building a world around with the right amount of ambience to it. So you need a little patience to sit through the first 20 odd minutes as one ‘interview’ unfolds after another. Slowly but surely the conflict is introduced through a series of creepy incidents which you could argue to be slightly cliched for the genre. But having said that, the writers are aware of it and they manage to keep the events subtle enough to keep you invested.

The fun begins in the second hour where the mystery behind the occurences begins to unravel. Through the mystery itself is not as shocking as it ought to be, the format of the narrative really comes alive through some expertly choreographed sequences that will make you cover your eyes. There are a couple of jump scares which are really well integrated in the drama, keeping the ambience of the film intact.

The crescendo continues and is at its peak in the final 30 minutes where the writers pack in everything to scare the living daylights out of you. So there is this paranormal style narrative combined with a dash of zombies along with the usual theme of the supernatural that makes the drama gory but absolutely delicious to consume in a mind boggling final act. In other words the screenplay is excellent here which also explores many themes related to religion and beliefs culminating into an end which is left to the viewer’s interpretation!

The dialogues are conversational and quite impactful and poignant in certain places. The BGM which is a highlight for any horror film is spectacular here. The subtle notes add to the atmosphere beautifully creating an image of fear in your mind successfully. The cinematography is excellent and the “found footage” kind of style never feels outdated in a horror film. Dire tor Banjong Pisanthanakun, the veteran behind Thai films like Shutter and Alone does a magnificent job here too. In today’s day and age, the attentiom span of the audience is limited and so the genre which would suffer the most would be horror. But to weave a gripping tale of fear using even some of the cliched elements is a sign of a great director. The direction is excellent here!

The performances are really good here. Arunee Wattana as Pang and Boonsong Nakphoo as Santi both have their moments to shine. Yasaka Chaisorn as Manit is first rate. Sirani Yankittikan as Noi shines especially in the backend of the film. Sawanee Utoomma as Nim is outstanding and she shows off her vulnerability spectacularly. Narilya Gulmong Kolpech as Mink is a pretty girl and for her to look terrifying may have been a task. But she is simply outstanding and absolutely frightening in certain scenes. She elevates her performance in the backend of the film summing up a memorable outing for her!

The Medium is a terrifying mockumentary that most definitely manages to get under your skin. Available on Amazon Prime and Highly Recommended!